Independence and the European Parliament Elections 2014

With one eye on the Scottish Independence Referendum and a YES vote in September, I have been deliberating over how to vote in the upcoming European Parliament elections on Thursday 22nd May.  These European elections are really important; to ensure the best voices for Scotland during a crucial period in our history, but also to stop UKIP getting any sort of foothold in Scotland.

Scotland has six seats at present in the European Parliament. We would almost certainly have more as an Independent member state; six is the minimum. Seats are based on ‘degressive proportionality’ since the Lisbon Treaty: that is, smaller states receive proportionally more seats than larger states. An Independent Scotland could expect at least eleven, perhaps even thirteen compared with other similarly sized independent EU member states, such as Denmark or Slovakia. Something to bear in mind.

In Scottish elections to the European Parliament we use the closed party list system of proportional representation. Voters vote for a party and the list overall, and candidates are elected in the order they appear on the list, as decided by the party. The D’Hondt highest averages mechanism is used to maintain close proportionality, but also to mitigate fractions and ensure that parties’ allocations are whole numbers.

Electoral Systems don’t excite everyone, but I think it’s important to understand how the seats are allocated, especially the sixth in the Scottish case. By way of an example consider the following results from the 2009 European Parliament elections in Scotland in Figure 1 below. After all the votes are counted a quotient is calculated for each party. We divide the votes for each party by one, then two, then three, and so on up to six, the number of seats available. Then the six highest numbers correspond to a seat won.

The ballot paper in 2014 is heavily dominated by anti-Independence groups, and moreover by right wing parties, particularly those of a less tolerant, xenophobic, even racist ilk. The only pro-Independence, anti-fascist, anti-Westminster options are the Scottish ‪Greens‬ or ‪the Scottish National Party (SNP). ‬ As something of an environmentalist and in pursuit of more radical, progressive left-of-centre policy, the Greens seem a natural fit. I might also cast my vote for the SNP, as a strong statement in favour of Scottish Independence; not as radical or progressive, but certainly left of the majority on the ballot paper. I liked Labour’s old work, but they’ve not been a party of the left or the people since the early 1990s (if I’m being kind). This has been the general consensus in discussions with like-minded friends: Green or SNP to speak for Scotland and stop UKIP?

In all likelihood in 2014 the first 5 seats will again be occupied by the traditional parties: SNP, Labour and Conservative. As in 2009, it seems likely that the SNP will take two seats, Labour will take two, and the Conservatives one. Liberal Democrat support has fallen away and as above the SNP vote would be divided by three at this point, so the sixth and last seat will most likely be contested between the Greens and UKIP. I’m always wary of reading too much into polls, but recent YouGov results indicate as much, with the Greens currently leading UKIP and the SNP, and the Liberal Democrats trailing well behind:

UKIP are a party of isolation, of hate and fear; more racism, more xenophobia, less compassion. With the mainstream media a willing ally, they’ve dragged UK politics even further to the right, pedalling a myth that rampant immigration is to blame for the UK’s slow recovery from the economic collapse of 2008. Immigrants are coming here to claim your welfare. Romanians are stealing your jobs. Migrants cost you a fortune in benefits. Lies, damn lies. I was amused and then saddened to read that in a recent YouGov poll respondents said ‘freedom of movement’ was the second best thing about the EU; their second worst was ‘immigration’.  Don’t drink the Kool-Aid.

Slow recovery is a result of misguided austerity and bad policy. A symptom of a lack of economic reform. The same rich bankers and greedy corporations continue to get richer and pay themselves huge bonuses, avoiding their fair share of tax and squeezing workers, while the rest of us, ordinary people, pay the price and inequality increases. In some areas of Scotland one in three children are living in poverty. As many Scots choose between heating and eating this year’s Sunday Times Rich List revealed the fortunes of Scotland’s 100 super-rich rose by 19% to £25 billion. The 1000 wealthiest in the UK now own over £518 billion; equivalent to one third of Britain’s gross domestic product (GDP), a rise of 15.4%. The first 64 names have a total fortune of £255 billion; equal to the combined wealth of the poorest 30%. Enough.

Scotland needs immigrants to fill the gap left in the labour force by an ageing, sometimes declining population. Demographics aside, immigrants in Scotland are net contributors, both economically and socially. A University College London study found that in the last ten years, immigrants to the UK contributed £25 billion; more in tax than they received in benefits, and were less likely to claim handouts or live in social housing than people already living in Britain. The positive impact of migration to economic growth and tax revenue in Scotland could be as much as £65 billion. There are far more student migrants than there are refugees or asylum seekers. We’re talking about skilled, educated people. The Centre For Research And Analysis Of Migrations report that migrants from the European Economic Area (EEA) paid 45% more in taxes than UK residents, whilst those from outside the EEA contributed 13% more. They also found that 32% of EEA migrants and 43% of non-EEA migrants had university degrees. Compare this with only 21% of UK nationals.

Positive, incentivised immigration can really help an Independent Scotland and most Scots are in favour of it. Oxford University’s Migration Observatory found that Scots were more supportive of immigration than the rest of the UK: positive views of immigration in Scotland lead negative by 10%; in England and Wales, negative views are 14% ahead. Westminster’s increasingly anti-immigration rhetoric is holding us back. The Scottish Diaspora is huge and I’d like to think we’ve made the world a more interesting place. The same applies for inward immigration to Scotland; different cultures bring vibrancy and diversity. Contrary to most reporting, it’s a big step to uproot and try your luck abroad. Immigrants are invested in making it work and contributing in their new home. How dare anyone value the right to freedom of movement so highly and yet deny it to others.

I’m completely committted to Scottish Independence, but Tasmina Ahmed-Sheik, the third name on the SNP list, also gives me pause. I’ve never met her, she might be a lovely person, but in the words of Alex Salmond, she’s a ‘political butterfly’; previously a member of both Labour and the Conservatives and having held some quite different views to me on homosexuality, education and privatisation. For the record I like my gays married, free and equal; my schools well funded and offering genuine equality of opportunity; and my services publicly or community owned and operated. 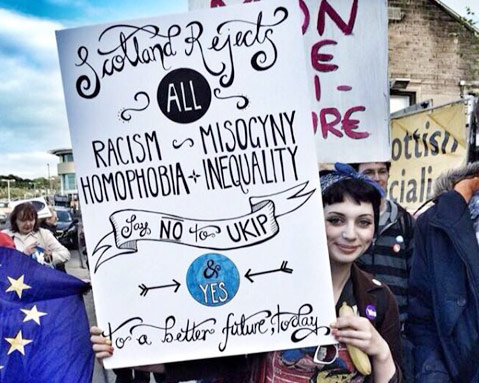 I’ve heard some people say a vote for UKIP is a protest against the Establishment.  One of my favourite comedians Stewart Lee summed this up best:

People have been voting for UKIPs as a protest vote and they’re nasty and they might get in and then what kind of protest is that?  That’s like s***ing your hotel bed as a protest against bad service and then realising you’ve now got to sleep in a s****ed bed.

A far more effective protest vote is for the Scottish Greens.

I have met Maggie Chapman, the first name on the Green party list. She struck me as smart, passionate and decent. She stands on a platform of a ‘just and welcoming’ Scotland. Greens make a positive case for the free movement of people and recognise the benefits for Scottish society and the economy; the same freedom us Scots currently enjoy elsewhere. They stand for ‘local control, handing power down to community level: from Europe to nation state, nation state to local councils and local councils to communities.’ [Editor’s note: Maggie Chapman also spoke at the launch of RIC Aberdeen in May 2013]

The Greens want to drive EU reform to make it more democratic, more relevant to the people, and recognise that the Commission is currently too powerful. We should be including citizens in the decision making process: services like post and trains should be under public control. We must increase workers’ rights and conditions, fight austerity, and instigate a living wage. Maggie supports the introduction of a rent cap and crack down on private landlords. We should put more focus on renewables, for jobs and energy security as part of a ‘Green New Deal’, but also to protect and improve the environment.  To reject fracking and shale gas extraction.  We have to tackle climate change. There is no doubt: the science is clear, there is a real and present danger. It’s time to restructure agriculture and take back power from the supermarkets who have far too much influence on production. To champion animal welfare.  To curb excessive executive bonuses and decide on a better way to tax and oversee the banks. To curtail the power of security apparatus and corporations; to enshrine personal privacy in all directives.  To promote ethical and fair trade and fight corporate power grabs like the Transatlantic Trade and Investment Partnership (TTIP). To fight xenophobia and isolationism, fear and bullying; to promote human rights and gender equality.

As Maggie put it herself:

To argue that Spain will overnight recall its Spanish fishermen from Scottish waters is ludicrous. To argue that countries across Europe will recall the students that study in Scottish institutions overnight is ludicrous. We may have heard some of these threats, but it’s not written in treaty; it’s up to us to make it work.

Even David Martin, MEP for Labour and Better Together supporter, admitted as much this week:

These European elections are especially important; Scotland needs strong voices in Europe in what could be a momentous few years. Although it’s important to make a statement in favour of Scottish Independence, I think at this European election, it’s at least as important to restate that Scotland is progressive and rejects the UKIP agenda. We want skilled migrants and we want to work with our neighbours in Europe. We don’t believe the scare stories and media hype about immigration; we value peoples’ freedom of movement. That Scotland votes different, thinks different, is an important argument in favour of Independence. There is a democratic deficit in Scotland. Our views are not represented as part of the UK; there is a disconnect, a disparity, between what we want, how we vote, and what we get. Immigration is just one of many examples. Scotland wants to be inclusive and we want our own voice on the international stage.

With all this in mind, I intend to vote for the Scottish Greens on Thursday 22nd May 2014. For Maggie Chapman as my Green MEP. For a radical, progressive voice for an Independent Scotland in Europe. I hope you might too.

The Radical Independence Campaign sees Scottish independence as the first step towards creating a fairer, greener, more democratic place. RIC Aberdeen are a local campaigning group, ordinary people who want to make a difference. We do canvassing every Wednesday night, along with other events. Please get in touch for more info.
View all posts by RIC Aberdeen »
« Previous post
Next post »

4 responses to “Independence and the European Parliament Elections 2014”

RIC Aberdeen is a group campaigning for a fairer, greener, more democratic society in Scotland, with independence as a long term goal. This blog is a place to share ideas, information about our activities, and anything else that seems relevant. We welcome contributions from anyone.